Share All sharing options for: Honouring Patachou: The 'Society Cafeteria' Shuts Its Doors

Shinan Govani, Toronto's best-known social columnist, tips his hat to the culinary clubhouse where Hollywood celebrities, International tastemakers, the literati, and your everyday Rosedale-ites rushed to eat and be seen. 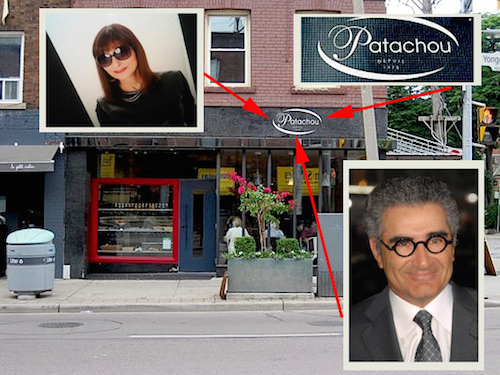 It's where real men came to eat quiche, and ladies of the manor got their just desserts. Also: a place where "cup or bowl?" is a song that's been going, well, since forever.

Patachou – the family-run patisserie, in the heart of zillion-thread-count country, in Rosedale-Summerhill – closes, at long last, this weekend. And when it does – having debuted when the original Charlie's Angels was on the air, and when "selfie" was long from being a word – it'll be one of the biggest rewrites in that easy-peasy part of Toronto. As robust as its signature French Onion Soup, strewn with good springy Gruyère: the memories of a place that essentially operated as a society cafeteria, first in its more rakish incarnation across the street, and then in its more Rue de Rivoli suggestion, at the corner of Yonge and MacPherson.

"They look like people I used to know," said a chum of mine when we stopped in to pay our last croissant-respects the other day, taking a good look at the crowd in the room. "I have basically lived off this green bean salad," said a woman at another table – a dead-ringer for Lucille Bluth from Arrested Development – as she twirled some.

So many ghosts of rendezvous past: a place where Eugene Levy hatched many a plan, and could frequently be seen funnyman fueling up. Where fashion-phile Jeanne Beker could be found breakfasting. Where acclaimed novelist John Irving, who keeps a place up the street, would occasionally pop in, and where extreme tastemaker Tyler Brûlé has been known to visit when in town, and where I sometimes spotted the late Ken Thomson, the patriarch behind Canada's wealthiest clan.

"Maybe we will have time now," owner Elizabeth Sidi said to me when I asked her if she was going to able to go on vacation soon. In The Grid recently she confirmed that the satellite Patachou – on St. Clair – would also be wrapping up, too. "Summerhill is where the kitchen is, so we're going to close everything. It's been a long run...but now, to get up at 4 a.m. is too much."

Every metropolis has these sorts of places – a cafe, or resto, that becomes, at some point, a neighbourhood stage. But with Patachou perishing, specifically on that dense stretch of Yonge, in Canada's largest city, the shift is palpable. Caffe Doria, down the street – where Margaret Atwood often reigns - will be extra-packed (in this circle of town, you were either a Patachou person, or a Caffe Doria person, it's been said!). Other bon vivants, inevitably, will migrate to Bar Centrale, the smart spot that opened a few years ago, across the street, as part of the Terroni empire.

Meanwhile, at Patachou, the other day, the scene played on, and a mother-and-daughter team could be seen grabbing as many to-go raspberry tartes as they could. "We're stocking up," the elder was heard to say. — Shinan Govani