Chef Craig Wong is spinning Jamaican/Chinese cuisine on its head. While he prepares to open Patois Toronto later this spring, his 60-seat restaurant at 794 Dundas St. West (formerly the mysterious MOM flower store at Palmerston), Wong set up shop at Tallboys last night (continuing tonight, April 13th and 14th) with a playful and considered menu that features Asian Island culinary mashups like Chinese "pineapple" bun burgers, reimagined perogies as Kimchi Potstickers, and the O.G. (Original Gangster) Fried Chicken & Watermelon Pickle – a "fragrant, sweet, and sour" dish that took three years of testing to refine. Though he suspects he'll be skewered by some for messing with an unbroken formula, the Toronto-born-and-raised chef/owner wants to show the city "that Jamaican food is so much more noble than the stuff we eat out of Styrofoam containers." For Wong, Patois Restaurant "is the food that I always wanted to cook, and, as a cook, always wanted to eat."

No stranger to the Toronto food scene – he is the concept chef at Tallboys; as sous-chef he helped to launch Oliver & Bonacini's Luma and Canteen – Wong spent three years in Paris, Lyon, and the UK, working at Alain Ducasse au Plaza Athénée and Heston Blumenthal's Fat Duck, but he's most excited about Patois Toronto because it's "the first place that is really true to me and my experiences." That experience is being a multi-culti Scarborough kid who ate big in Little Korea and Little India, and gorged on Richmond Hill's dim sum; it's inspired by his families' Caribbean heritage and Chinese take-out food; a love for reggae music that extends past Bob Marley into dancehall but also has room for rock 'n roll and the blues; and a sense of experimentation that extends from the menu to décor flourishes that includes laser etchings by Straight Laser, custom tabletops by Chris Ringer, and a new take on the Lazy Susan that Wong laughingly calls "eye-catching" and "epic." The overall concept – developed with Wong's wife, Ivy Lam – takes its cues from the concept of Patois, a French word that describes the linguistic mashup of English and West African dialects. As Wong says, "It's all those cultures that went to make Jamaica what it is. And that's exactly how I see my food. It's all the cultures I've experienced where I've lived and food that I eat that influences what I do."
Check out the Patois Toronto menu that is cooking at Tallboys today, and continues on April 13th and 14th. 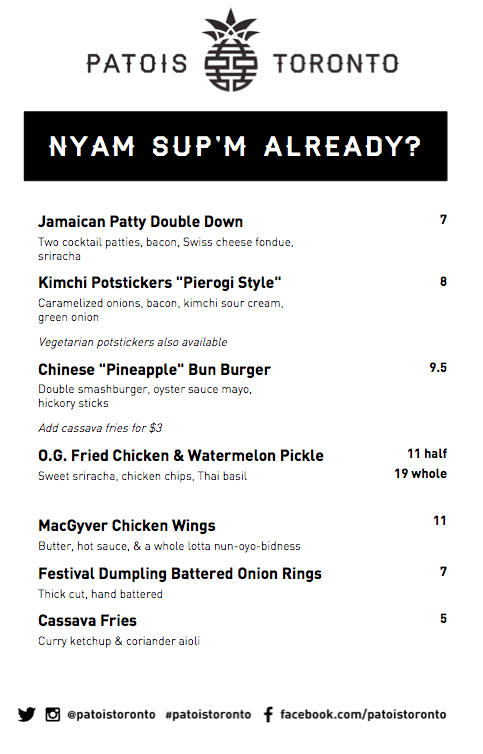