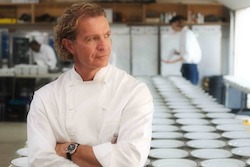 Mark McEwan's food empire has just grown another 5000 square feet. The restaurateur/celebrity chef has announced plans to open a high-end food shop across from his Bymark restaurant in the TD Centre in Spring 2015. As reported by Post City Magazine, the shop will be a trimmed down version of his immense Don Mills location and offer grocery goods, freshly prepared foods, and a café with close to 100 seats. [Post City]
[Photo: Twitter]