Share All sharing options for: St. John's Fergus Henderson and Trevor Gulliver Know How To Party

Last week, St. John's co-owners Trevor Gulliver and Fergus Henderson, the gents who made nose-to-tail mainstream, their head chef Chris Gillard, and head pastry chef Tom Trubshaw, were in town for two consecutive Charlie's Burger dinners. The events were held at Leslieville's Skin + Bones where guests dined on everything from anchovy toast, crispy pig's cheek to Eccles cake. Eater caught up with the pair at The Drake Hotel over a bottle of local Pinot Noir. Not only do we learn about their drink of preference (local wines when they're visiting our soil; Fernet Branca for all other occasions), their terrific sense of humour, and the fact that they love to party, but we talk about "dude cooking," hockey strategies, and how they might (not) be opening up a karaoke bar in Toronto. The interview, in which we struggle to decipher fact from fiction, the shenanigans, and more, below.

Welcome back to Toronto, Gentlemen. "Back" being the operative word, since this isn't your first visit to Toronto, is it?
Gulliver: We've been here a bit. We did Terroir three years ago, and I came back last year […] And every now and again we come through. We're going to hockey tonight. It's Canada for the Canadians!

Since you've swung by quite a bit over the last few years, you must have noticed a change in the city. What are your thoughts or impression of Toronto's culinary scene? (Gulliver points to Henderson) Haha, I like how you've diverted this to Fergus.
Henderson: Um… well, it's a vibrant foodie scene judging by what we've eaten.
Gulliver: There are still good people here, and their [restaurants are] becoming relatively stable. We were talking about this with Malcolm Jolley (Good Food Revolution) the other day. One of our first lunches was at Jamie Kennedy's. He's had a couple tough [patches] but he's survived, and now he's kind of happy. But he's a very good chef. There's also… it's about the cow, what is it called? (Henderson: Cow thing in the box…) It's a bit like Chris Cosentino in San Francisco. The cow thing. (Eater: Cowbell? With Mark Cutura in Parkdale.) Yes, Cowbell, it's sad he's not there anymore. We've had good bread – but don't ask us where, because I can't remember. So David (Chang) comes here, and he does Momofuku by the Shangri-La, Daniel (Boulud) with Tyler (Sheddan), next thing Danny Meyer's going to open a Shake Shack here. It's a whole new world now. Finally there are Toronto people cooking [food from outside the city].

Have you heard Jonathan Waxman is also coming, so Toronto seems to be drawing in a lot of international interest?
Gulliver: What has changed is there are more places to go outside of [downtown] where the rent is cheap and people are willing to travel. The interesting thing we're seeing this time is youngsters running their own restaurant. There's also a lot of dude cooking, which is checked-shirt, goatee beard, vinyl records, and natural wines… (Eater: Do you mean Hipster?) Yeah, Hipster. If we stand up (Gulliver starts to stand and reach to his lower back) you can see that we both have Calvin Klein right across our backs. He's got Calvin (points at Henderson), I've got Klein.
(Henderson gives Gulliver a slightly surprised and bewildered look.)

And you? Have you had offers or been approached with doing something like this in Toronto?
Henderson: Well, yes, there has been a flirtation here or there. But, uh…
Gulliver: No, there is no story here. Yes, we get asked and it's the usual suspects, not just Toronto. Can we do San Francisco, Los Angeles…? We've dabbled occasionally but kind of walked away.

So your main focus is to stay in London and perhaps cook at special off-site events like Charlie's Burger?
Gulliver: We were asked to come and we like to party. So we said to the boys, 'Let's go to Toronto. They're going to fly us over.' 'Yeah, we'll go there! Yeah, yeah.' But only in March because it's really cold in January. For us, it comes as a surprise. We don't get it sometimes; we do what we do. It's good fun.

This year has been brutal all winter, so hopefully this wasn't too much of a shock.
Gulliver: I know, it was quite cold, but that was about four in the morning… that's when it whistles through your trousers. One of the dinners we did, there were four girls that were a bit like 'Sex in the City' who came out with us and stuff. One of the girls said to me: 'Trevor, two pairs of underpants.' Do you know that I didn't think of that? Haha. And she went 'I'm wearing two pairs of underpants.' Haha. It's a nice thought. Haha.
(At this point Franco Stalteri, founder of Charlie's Burger, joins the table.)

Gulliver: This is our young assistant. (Stalteri laughs. He's carrying a reusable bag from St. John which we notice. Gulliver then offers to gift us one of the eight he's brought in to the city.) We met when Charlie's Burger hosted a dinner at St. John years ago. We were like 'who are these people? And they want to do what? We don't do anything like this.'
Stalteri: They were not quite sure before they met me, and then when they met me they were definitely sure… (Laughing)

You were joined by your senior staff from St. John, but did you have any help from Toronto chefs at the dinner?
Henderson: Yes, they were helpful. Normally when people ask to come into your kitchen to cook, you're uncomfortable. The chef at Skin + Bones, Luca, was far from that. They were really welcoming and nice.

How many people did you have helping you?
Gulliver: About 800. Haha.
Henderson: About five or six. But it grew with service.
Gulliver: There was a guy who wasn't in whites who kept on eating things. I'd ask, 'Are you eating?', and he'd answer (muffled mumble).

We hope [Noah's] going to get a proper shop now. We've met the mother-in-law, been through everything. He only left us because his Visa expired and he had to go. Which happens. Now it's time to open shop.

Well if you were thinking of opening up a branch of St. John, say, in Toronto, and Noah's here…
Gulliver: We're opening here next Tuesday. It's obviously a lie but then you're doing journalism, so it doesn't matter, right? (Laughing)

Oh, ouch! Haha. Just watch it might go viral.
Gulliver: Oh good! Great!
Henderson (to Gulliver): You should be careful what you say. (Laughing) 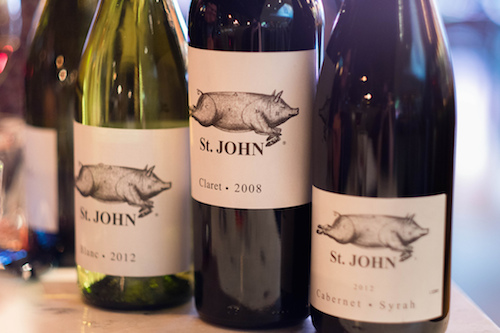 You started to sell your own wines in the early years of the restaurant, but its availability to the general public through a distributor (like Charlie's Burger) is relatively new. What was the premise behind that?
Gulliver: We were a bit of a surprise because the reason we have our own wine is not to promote our brand like a t-shirt. There was no aggrandizement; Ferg and I weren't thinking of a range of olive oil, or Eccles cakes in a six-pack… (Eater: I wouldn't be opposed to something like this…). (Laughs) [Having our own wines] assured that day in and day out that it would be good. So when you come into our restaurant and you order that (points at wine bottles), it's consistent.

What would you attribute your almost 20 years of success to?
Gulliver: We are surprised by that. As you can see, it's very simple. […] If you have integrity, you can't lie. We tell young chefs, the first time you lie, you've lied to yourself. And most kitchens lie all the time.
Henderson: Good chefs I know do the right thing.
Gulliver: Fergus is right. We only know good chefs. They are friends. The argument [within that circle] isn't even relevant but more for the middle [tier]. Do you stay in hotels? Do you know how many times they change the sheets or if they refill those little bottles of shampoo? You've got to think about how they do things. 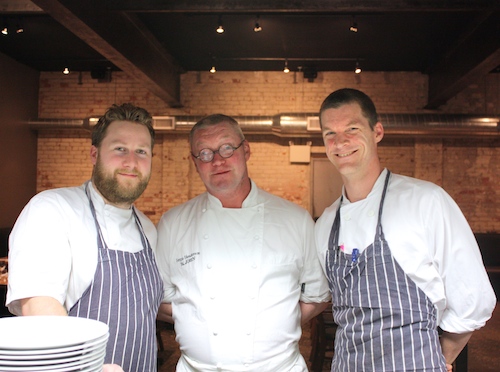 So while your team is here, is there someone else running it while you are away?
Gulliver: St. John has a way going about doing what it does and everybody knows that that's the way it works. The day you see me might mean that there's something wrong. We have really able chefs all the time, at the front of house… I'll tell you, you'd really not want me to serve you.

I'll keep that in mind. So if I see you in the restaurant, I should turn and run. Haha.
(Everyone bursts into laughter.)
Gulliver: I rest my case.
Henderson: I abstain. (Still laughing)

You mentioned going to a Maple Leafs game tonight. You seem to know your hockey.
Gulliver: Assimilate right away. Or don't sleep, drink with chefs and other people. We're going to change their luck.
(Update: the Leafs still lost.)

What's your secret? How do you do that?
Gulliver: What the Maple Leafs? Change the roster, sack the coach… (Laughing) Buy the Canucks or one of those teams that are winning. That's what you do!

Haha. No, I meant staying up. You both have a reputation of being able to party harder than younger cooks. Do you drink energy drinks?
Henderson: Fernet Branca. A big help.
Gulliver: True story. We went to this bar a couple years ago. There was glass and beer and mess everywhere. We kind of stepped over… (Henderson: Hmm, dead chefs.) Yes, dead chefs. We grabbed our hats and went outside for a cigarette. I said, 'Fergus, I really like these long winters and how it never gets bright,' and Fergus goes, 'Trevor, it's five o'clock [in the afternoon].' And I was like, 'oh shit.' Heh. No wonder they were dead on the floor. (Lots of laughing.)
Henderson: Well… they were asleep.
Gulliver: It was actually a karaoke bar…
Henderson: I was singing and they fell asleep.

I didn't know you karaoke'd! Do you have a go-to song?
Gulliver: We don't karaoke.
Henderson: Not that often.
Gulliver: The Girl from Ipanema. (Starts to hum.)
Henderson: James Brown. Two words: get up. Get up. Get up!
Gulliver: That moustache! Yeah, I want one. Heh heh heh.

Now I'm going to spread rumours. The St. John folks like to karaoke.
Stalteri: The rumour is, I believe, a St John's karaoke bar opening up in Toronto next Tuesday.

Gotcha (wink). So seriously, is there anything on the horizon that all of us can look forward to?
Gulliver: Yeah, we're quite looking forward to doing that thing with Daniel (Boulud) at the Four Seasons. Then we're going to do a bakery…
Henderson: He's joking, of course.