Share All sharing options for: Jonathan Poon On Chantecler's Two Years In Parkdale

Chef and co-ownerJonathan Poon steps out of the kitchen.

Weirdly enough, Parkdale wasn't always a dining destination. Just a few years ago, "seedy" ranked near the top of the neighbourhood's descriptors. Then the restaurants came: buzzy spots like Parts & Labour and Grand Electric, but also more low-key places like Chantecler. That latter restaurant — which got the entire city to rethink lettuce wraps — is now celebrating its two-year anniversary. We caught up with chef and co-owner Jonathan Poon to talk about the west end, McDonald's, and freaking out Gordon Ramsay-style.

It's been two years since you opened Chantecler. What have you found most surprising about owning your own restaurant?
Well, you work so hard to get a place going, and you're under the impression that you have full creative control. People think it's so great that you own your own restaurant and you can do whatever you want, but that's not how this business works. What you serve is dictated by the market. So we switched our format — the restaurant switched over to serving lettuce wraps, and we also do a tasting menu. So there's a lot of strategy involved with opening a restaurant. It's not all about putting out a great product. 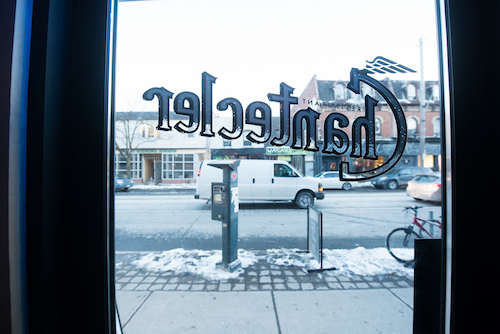 Why do you think the lettuce wraps took off the way they did?
It was different. Toronto is seeing a transition to a more casual style of dining. Everyone is more educated about food and expects a certain quality of product, but they don't necessarily have the finances to eat out. The whole taco craze really started this change. People want quality food, and tasty, but at a very low price point. And that's what we did with the lettuce wrap.

And you recently got into dim sum — or at least your take on dim sum — for lunch.
It's not an entire menu of dim sum, but the dim sum-ish items are more refined takes on dishes you might find at a classic Chinese restaurant. The one that everyone talks about is the turnip cake with XO sauce. It doesn't stray too far from the classic, and that's the beauty of it. We developed the recipe over weeks — it was the staff meal for like two months — and then we finally nailed it.

And there's a bit of a McDonald's influence on that lunch menu, isn't there?
Definitely. I love McDonald's, especially in the morning. The breakfast menu is my favourite. The sausage egg McMuffin, stuff like that. And I wanted to do a version of that, but a bit better. Not replacing it, because you can't actually replace McDonald's, but we make a good version of what they do. Essentially the lunch menu is just dim sum and McDonald's.

How has the neighbourhood changed from your perspective since you first opened?
When we first opened, this wasn't an area that people would flock to. But now, there are other restaurants like Porzia, Electric Mud BBQ, and Small Town Food Co. There are more people that will come to the area, and people who have never been to the area are being exposed to it because there's a draw. It's almost its own restaurant strip now.

Have you had any particularly memorable guests come in?
We've had all sorts from celebrity chefs to actors. Obviously we've had a lot of Toronto chefs come in, so that's always very nice. We've had international talent come in. The sous chefs from Noma came in, and Curtis Duffy, who was the chef de cuisine at Alinea, came in, which was pretty awesome. We also had the Japanese competitive eater, Kobayashi, come in. Surprisingly, he did not eat very much.

Speaking of Noma, you worked there and at other restaurants around the world. What's the craziest restaurant you've worked at?
Obviously the most unusual and significant for me would be Chantecler. But besides my own, there are a couple of restaurants in Australia that I thought were very different. They have a very old-school mentality over there. It's exactly what you'd see on television with like Gordon Ramsay yelling at you and throwing stuff. That's what it was like in Australia.

Do you ever have Gordon Ramsay moments?
I certainly did, but that was many years ago and I think I've smartened up. You can't keep your staff that way.

What's next for Chantecler?
I have high hopes to expand on the lunch menu. It's my favourite menu currently. I like it way more than the tasting menu. — Jon Sufrin

Take a tour of Chantecler:

Editor markup for Restaurant Chantecler. This is only visible in the story editor.