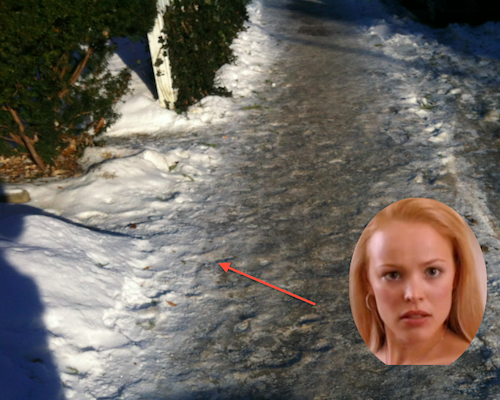 Don't forget to sign up for the NEW Curbed Toronto newsletter. It's fun, it's exciting and it's very real estate-y.

ANNEX— OMG! Curbed's biggest story of the week was our "breaking" news that movie star and Annex resident, Rachel McAdams, doesn't shovel her sidewalk. The actress who lives with her brother in a semi-detached house hasn't shovelled all winter and her pathway was an ice rink following the storm. Following the balmy weather, the ice has melted, lucky for her or she could have been fined by the City of Toronto.

TORONTO FLOPHOUSES— Back in May, local developer Paul Wynn put together a proposal to raze the decrepit old Hotel Waverly at 484 Spadina (while promising to preserve the adjacent Silver Dollar Room), in order to build a 22-storey student residence on the site. Yesterday Toronto and East York Community Council vetoed the plan, so it looks like Wynn is going to have to take his case to the Ontario Municipal Board (OMB). Is it worth preserving? Discuss.

DANFORTH— The Carmelina Condominiums, one of the few new condos making its way to Greektown in March 2014, is an intimate new address at Danforth and Woodbine Avenue. It's a 12-storey building that's close enough to the Danforth but far enough during the extra crowded Taste of the Danforth annual festival.

YONGE & DUNDAS — Just announced, US retailer Nordstrom is moving into the Eaton Centre, taking the spot of SEARS. From the positive reaction on Twitter, Torontonians are happy that SEARS is out and Nordstrom is in. Also happening nearby is the anticipated Aura Condos, Canada's tallest residential building and its adorable but highly superstitious little sister, YC Condos, down the block.

YORKVILLE— In other celebrity real estate news, Actor Mark Wahlberg is moving to Yorkville come this June. Wahlberg bought a 4,600 square foot penthouse for $12 million dollars at the new 36 Hazelton Ave Condos. Expect to see the actor and his entourage hanging out on Cumberland Street.

ON THE MARKET— Of course, Curbed Toronto also has some awesome listings from around the city. Here's a few mansion with mind-blowing indoor swimming pools, a teeny tiny 500 square foot condo near Bayview Village and a mansion in the Annex listed for $2M which includes one jazzed-up toilet.